Choosing the right time to take your MRCP(UK) examinations

Each pass in your MRCP(UK) examinations marks a milestone in your career, and is the result of significant preparation and study. In addition, passing all three parts of the MRCP(UK) examination is now a requirement for entry into specialist training in the UK. Naturally, candidates are keen to maximise their chance of success. The exams are challenging and while hard work is required, getting the timing right is another important consideration.

We can offer some broad guidance, based on statistics we gathered on candidates who gained their primary medical qualification between 2005 and 2009. However, it is important to remember that these data reflect trends across a large group, while individual situations differ. Therefore, we would always encourage you to discuss this decision with your clinical supervisor.

In general, the data suggest that pass rates are highest when candidates:

The information here will help you make the best choices about when to take your exams. Details about each part of the MRCP(UK) are provided below.

If you are considering a resit for one of your exams, you might find the information on repeated attempts of interest.

This probably reflects the fact that candidates most confident of passing make their first attempt at the earliest possible opportunity. Whereas you should not apply before you feel you know enough to pass, the data imply that trainees who are well prepared can expect to pass at the first attempt and should not delay this beyond 24 months without good reason, so as to leave sufficient time to complete the further stages of the examination by the end of core medical training.

Pass rates may be higher for this exam, because an able group of candidates has already jumped the hurdle of passing Part 1. There also appears to be a longer period of peak performance on this exam. The highest pass rates on the Part 2 Written Examination are achieved by candidates who make their first attempt within 36 months of graduation. This period coincides with the end of the CT1 year in UK medical training. Candidates taking the exam between 12 and 24 months after graduation are slightly less likely to succeed, but the pass rate is still above 85%.

The PACES data demonstrate the importance of developing knowledge and skills in a clinical setting before taking this exam. Only a few candidates attempt PACES between 12 and 24 months after graduation, and they are very unlikely to pass. The pass rate increases to more than 60% for candidates who delay their attempt to between 24 and 36 months of graduation, while those who wait until between 36 and 48 months have a 77% pass rate.

Candidates who have passed Part 1 may then proceed to attempt the written and clinical components of Part 2 in any order. However, those who take the Part 2 Written first are more likely to pass PACES on their initial attempt.

The Diploma exams set a very high standard and many people do not pass at their first attempt. 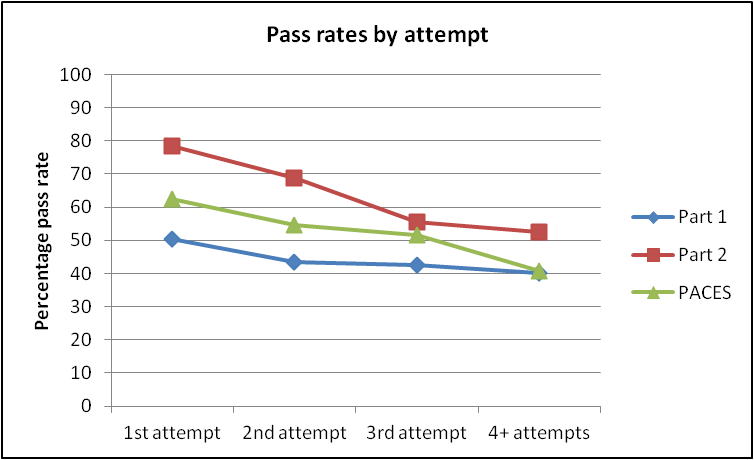 We would stress that these are group trends and each candidate has individual abilities and circumstances. You might find it helpful to discuss this information with your clinical supervisor, who knows you well, to make the best plan for your next steps.

The pass rate for Part 1 is about 50%, among UK trainees sitting it for the first time. This figure is about 60% for PACES and 80% for Part 2 Written. You can see the full pass rates, including those for international candidates, here.

From 1 January 2014 the maximum number of attempts allowed at each part of the examination is six. Further information on this subject can be found on the Limit on attempts webpage.

You might be encouraged to know about research that suggests performance generally improves at each subsequent attempt. In other words, provided you have prepared well, you could reasonably expect to achieve a higher score at your next attempt. However, this improvement tends to reach a plateau after several attempts, when candidates reach the best score they can, but still do not pass. Also, if you are starting from a low mark, a pass will be harder to achieve.

In a large study supported by MRCP(UK), Professor Chris McManus and postgraduate researcher Katarzyna Ludka examined candidates on the Diploma examinations from 2002/2003 to 2010. They compiled results from:

Analysis of the group’s results showed that performance on all of the exams improved with each resit, up to a point after which there was not significant improvement. This effect was seen for up to ten attempts at Part 1, four attempts at Part 2 Written and six attempts for PACES.

The authors added that the starting score (close to pass vs. a very low mark), plus the rate and degree of improvement, varied widely between individuals.